i’d like to preface this by cautioning readers. the following essay contains scenes depicting graphic content. the narrative intends to help readers understand and experience the emotional trauma of sexual assault firsthand. the overarching theme strays from the norm. this is not a self-help editorial. this is a personal testimony two years in the making.

setting the scene: once so young, dumb, and full of hope.

let’s pretend i’m your typical college student straight outta sophomore year. just a couple months shy of that milestone “21” birthday. we’ll say that I’d only been back in my hometown for a couple days after having spent a semester internship in florida and a month volunteering at a school in l.a. it was that two year mark after high school where you came home for the summer to see who got hotter vs who had obviously peaked. i’m pretty sure, in this hypothetical scenario, i fell under the former of those categories. because tbh i looked good. i was in shape. my skin glowed with that golden, sunshine-state tan. my extra blonde hair flashed with streaks of color highlighted by the sun. basically, how about we imagine i resembled a vertically challenged malibu barbie. i even remember the shirt i was wearing that night, too.

okay so let’s pretend there’s a guy. let’s say we went to high school together but he was a year older. let’s call him jake mcdonald.

next we’ll say there was a bonfire at his house. it was one of those mild nights, early in the summer where you feel the seasons start to turn. he threw a going away party for our mutual friend and everyone was drinking. now imagine being the only girl. but it’s chill, you can hang. plus all the guys are over the moon because that girl never partied or drank in high school. naturally they keep offering her drinks. a lot of drinks. clearly an excessive amount of alcohol for a relatively short (okay 5’2 isn’t that short) girl who never parties.

everything after that. well.

it’s just foggy and dark. supposedly at one point, i sat on the edge of the back porch alone. i stared with glazed eyes. numbly yet blankly as he walked back to where everyone was huddled around the bonfire. apparently i wouldn’t say anything. i just kept singing cocoa butter kisses by chance the rapper over and over. i still don’t know if i actually remember this, or if i just tried to believe i remembered because someone told me later on.

and a hush fell over the crowd: this was not my body.

the next thing i was conscious for was waking up on a hardwood floor i didn’t recognize to the early morning sun glaring in my eyes. i started to get up but quivered under the sore pain. granted, i’m not gonna pretend like i haven’t had my token college hangover experiences. but this was worse.

i literally dragged my body like some kind of undead zombie over the threshold of the house and tried to hold back the bile rising in my throat that was aimed straight for the nicely pruned hedges. (looking back, the vengeful/angsty carrie underwood revenge song part of me honestly wish i had.) by some miracle i got home. i crawled into bed hoping my family would leave me there to either recover for 8 days or just die. whichever came first i guess. but in the scenario we’re imagining, i felt a sudden incomparable pain seared through my lower abdomen. jesus christmas. this was death.

unfortunately, this next part burns in my memory. and unfortunately because it’s the worst part. imagine it as those weird inbetween moments where you’re hurtling through space while simultaneously unmoving and still.

alone in the bathroom. staring. there was just. blood. there was just so much blood. (and no. not the aunt flo kind.) my body was moving slow motion but my thoughts went 0 to 100. why was i bleeding? why wouldn’t it stop? why was i so lightheaded and nauseous? why did i suddenly feel half a second away from passing out? why don’t i know what the fuck happened.

in a matter of mere moments i’d already sent a text to someone who’d been there last night.

“did something happen with jake last night.”

“yeah. he was bragging to everyone how he did you up the butt.”

*pause for a minute. read that again. let it sink in.*

no words in the english language exist for this. i felt like i was falling into the sunken place. everything started going black. i literally thought my insides were oozing out of my body. lucifer was sending all the pain and anguish existing in the world into my body at that moment.

immediately following this exchange i had my first panic attack. and sooo began my courtship with anxiety (don’t worry, we’re still together). let’s pretend next that my almost instantaneous physical response was hyperventilation. curled up on the bathroom floor like the sad climax to an indie movie. heaving sobs and broken breaths felt like strangling suffocation as my mind and body went into shock. at some point hades opened the floodgates of emotional hell to the feeling of salty tears rolling down my severely dehydrated, hungover face.

fuck it. let’s stop pretending. i was broken. 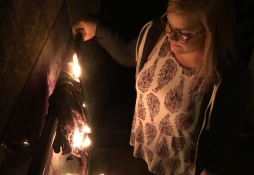 he won the battle, but i won the war 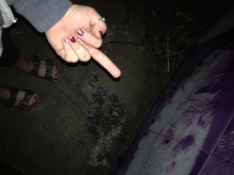 he won the battle: the not so resolution.

i met him. after it happened. why? hell, i still don’t know. maybe i wanted to give him the benefit of the doubt, a second chance, let him prove he wasn’t a modern day norman bates; initially docile and pathetically sad, but *plot twist* actually a psycho.

we went and walked down the milton trail. objectively? the most awkward/uncomfortable walk of my life. definitely not one to remember. nor starring mandy moore. we talked about ourselves a little. but then, oh then this bastard had the audacity to admit it’s not the first time it’s happened. he did the same thing to someone before. hearing that made me want to die. wondering how you could possibly fucking decide to live your life being that guy. the guy who fucking rapes people. how has no one schooled him yet. finally we got around to what happened that night.

he claims he was really drunk too. he didn’t know how drunk i was. blah blah insert some meaningless bullshit blah. whatever. none of that changes the fact he remembers raping me and all i’ll remember is a black hole where a memory should be.

maybe because i was desperate for closure. maybe because i couldn’t find any other way to cope. maybe because sometimes i blame myself. maybe because as we walked down the trail and i glanced over, repulsed, at his sallow, pasty, should-get-checked-for-jaundice skin, and over-gelled macklemore-wannabe haircut; i pitied him. maybe there’s a lot of “maybe” to a lot of things. either way i still don’t know why i did it. but i forgave him (because he asked). i think i just wanted desperately to pretend like it was fine. i tried to pretend like i’m the reason it happened. honestly. imagine feeble thoughts reciting in your head and, after so many times, became your truths.

it’s my fault. it’s my fault. it’s my fault. i drank too much and i’m underage. i didn’t say no. no one else stopped it. it’s not his fault. he didn’t mean to take advantage of my barely conscious, unconsenting body. my inability to say no obviously must inherently equate to a yes. i mean, consent is a social construct anyway. why would i ever want a man to respect my body when it could be violated instead.

y’know. all the classic victim shaming bullshit that our patriarchal dominated society tries to shove down our throats. in turn, i eventually tossed that crap out the window and got woke.

i haven’t seen him since.

but i won the war: epilogue.

now (granted you still assume this is entirely hypothetical) (if so you definitely haven’t been paying attention) let’s say this is real.

sexually assaulted. taken advantage of. forcibly violated. sodomised (that one always makes me cringe). raped. sure there’s more than one name for it. but there’s this one feeling. even though it’s been two years, that feeling never really goes away. i feel it in my varying forms of anxiety. i feel it when I’m in a crowded room, unable to control what’s happening around me. i feel it whenever a man looks at me in a predatory way. i feel it in my adamant aversion to touch and intimacy. i feel it in my fear of emotional commitment or dependency. i feel it on the bad days when i won’t leave my bed. i feel it when i glance in the mirror and see a person i wish i wasn’t.

it only took about two years or so, but i’m just starting to get closure. two years of being a lil’ bitch who can’t confront her emotions. it took both wanting to move on, as well as a way to do it. y’know earlier when i said i remember what shirt i was wearing the night it happened? welp. it’s been hanging up in my closet these past two years. yep. still there. mocking me every day. my own twisted souvenir from a trauma i spent exactly 836 days of my life pretending never happened.

my therapist asked me why i still kept it. all i could say was shit under my breath. because i don’t know why. granted this is coming from the girl who still has a shirt from 3rd grade & never gets rid of old clothes. her question kept rotating in my mind like a rotisserie chicken. then suddenly i refused to look at it another day (apparently 837 days of pretending would be far too excessive). so you bet your ass i burned that son-of-a-bitch shirt. i burned the hell out of it until it was nothing more than synthetic fabric ashes. then i aggressively swept them into the puget sound. in the words of the great beyonce: tell ’em ‘boy bye’. i will never see that shirt again in my life. i will never see jake again in my life. no more physical remnants exist from that night. i’ve never been much of a pyromaniac, but watching that stupid shirt go up in flames was a surprisingly cathartic experience. 10/10 recommend setting things on fire for closure.

if you’ve ever wondered why i’m kind of a basket case, well i guess this is why. i felt a lot of pain the last two years. maybe jake won the battle 836 days ago. but guess what.

i won the fucking war, bitch.

2 thoughts on “he won the battle, but I won the war”